skip to main | skip to sidebar

In fourth was the team of Daniel and Steve Gentz both of St. Louis, Missouri weighing in 22.92 pounds and earning $300.00. Daniel and Steve were vertical jigging chartreuse Southern Pro jigs fishing in 23 feet of water up the Blood River area to catch over 50 fish for the event. Daniel and Steve credited Stubby Steve's biodegradable scent attractant for catching their fish. Several teams used the new Stubby Steve's attractant on their jigs and commented how it stayed on the jig longer than any other attractant on the market and really helped them get more bites and caused the fish to hold on to the jig longer. 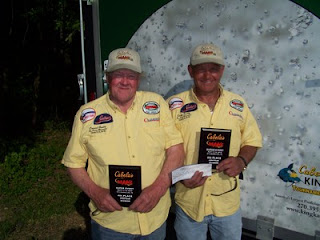 Congratulations!
Posted by Stacy at 11:09 AM