skip to main | skip to sidebar

$10,000.00 Super Event
This past Friday and Saturday April 27th & 28th Crappie USA held a 2-day $10,000.00 Super Event on one of the most popular tournament sites in the nation the Pickwick/Wilson Lakes at Sheffield, Alabama. Over 100 anglers from 13 states were competing for not only the $10,000.00 in cash and prizes, but the opportunity to qualify for the prestigious Cabela’s Crappie USA Classic. This year's classic will be held October 24th-27th, 2012 on the Barkley/Kentucky Lakes at Cadiz, Kentucky... 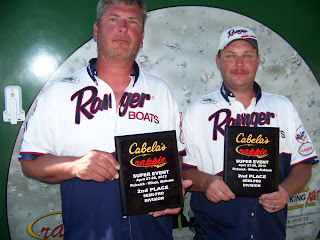 Fifth place went to Jo and Henry Haley of Carmi, Illinois weighing in 19.17 pounds to earn the Driftmaster Anchor System. Jo and Henry were slow trolling blue/chartreuse and yellow/green Southern Pro jigs tipped with minnows and Stubby Steve baits over manmade cover in Bear Creek to catch over 70 fish in the 2-days of the event.

(waiting on a photo!)

Fifth place went to the team of Daniel and Steve Gentz of St. Louis, Missouri with a weight of 15.31 pounds and earning $300.00. Daniel and Steve were fishing Yellow Creek in 14-16 feet of water using live bait tipped with Stubby Steve's bait. The team credited Stubby Steve's Bait for their good tournament finish 2 weeks in a row. 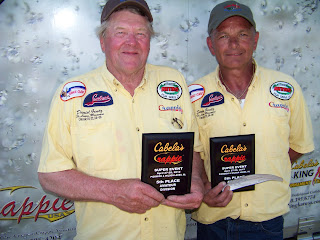